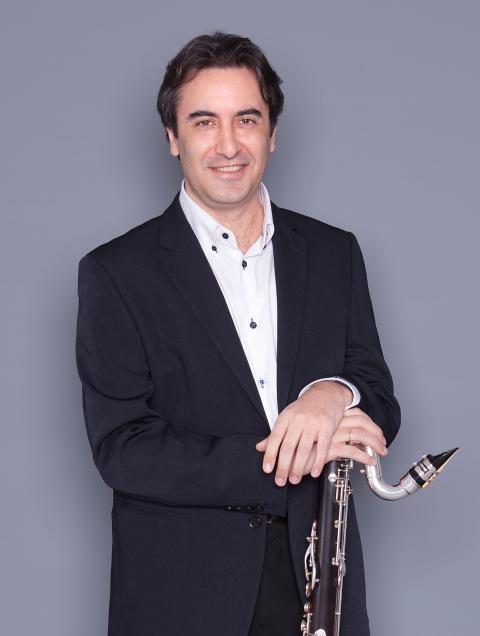 Pedro Rubio has the Clarinet Performing Diploma from the Royal College of Music in London and the Bass Clarinet Diploma from the Rotterdam Conservatory under the direction of Henri Bok. Since 1991 he has been performing with pianist Ana Benavides. As a duo, they have received prizes in many international music competitions and have participated in festivals such as 30th Clarinet Symposium, Oklahoma; 1st World Bass Clarinet Convention, Rotterdam; ClarinetFest 2006, Atlanta; 3rd and 4th National Clarinet Congress, Madrid; 1st Bass Clarinet Meeting, Madrid, 2006; ClarinetFest 2010, Austin; ClarinetFest 2011, Los Angeles, ClarinetFest 2014, Baton Rouge and ClarinetFest 2015, Madrid. To date, they have recorded seven CDs: Duo Rubens; Pérez Casas, his Work for Clarinet; The Spanish Romantic Clarinet vol. I, II and III; Spanish Clarinet Pieces from the First Half of the 20th Century; and Salón Romero, en torno a Antonio Romero y Andía. In 2007 he founded the publishing house Bassus Ediciones whose principal objective is the restoration and retrieval of the Spanish repertoire of the 19th century, and the publishing of Spanish music written for bass clarinet (www.bassusediciones.com). He is a D’Addario Performing Artist and plays exclusively on Reserve reeds. Pedro Rubio is currently clarinet professor at the Turina Conservatory in Madrid, and bass clarinet professor at the Royal Conservatory of Madrid.